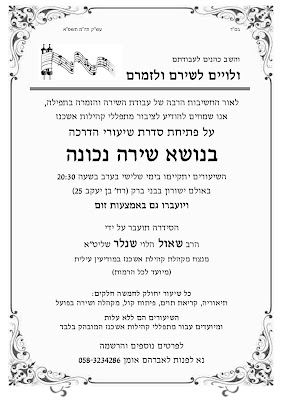 Outdoor minyan (Maariv only) on the first night of Pesach.

Adas Beit Shemesh, the Minhag Ashkenaz Minyan of Beit Shemesh Ramat Aleph. IYH, we will have an outdoor minyan (Maariv only) on the first night of Pesach.

In accordance with Minhag Ashkenaz, we will say piytuim and will not say Hallel. We will supply a  print out of the piytuim, but please bring a siddur.

Sorry, but once again due to the health regulations we will not be able to hold our monthly RBSA Minhag Ashkenaz/Yekke minyan this coming Friday night (first Friday after Rosh Chodesh).

However, for some good news, B’ezras Hashem, the interactive chabura/shiur of Rabbi Rubinstein Shlita is continuing this Friday June 26th at 10 AM on Zoom and by phone. Rabbi Rubinstein is the Rosh Yeshiva of Yeshivas Ohr Yehoshua which graciously gives us a room in which to hold our Minhag Ashkenaz Yekke minyan each month.

This week’s topic will continue on the concept of מיפך שבועה, the option of the claimant to flip the obligation of the shevuah on the claimer

No prior attendance is required. No preparation is required. (But if you are able to see the sugya beforehand you will find it helpful.)

About 1 hour total including a few minutes at the end of insights on the parsha / current events with practical application for chinuch, shalom bayis, parnassah and other important matters of life

No charge / no solicitation of funds / and no commitment

Minyanim for Iyar and Sivan will not take place

Will not take place due to the public health situation

Dear Chaveirim of Adas Yeshurun of Beit Shemesh. Here are some words of chizuk from Rav Yosef Rubinstein, shlita, the Rosh Yeshiva of Yeshivas Ohr Yehoshua where we hold our minyan:


Hello all my dear friends,


We are experiencing special and challenging times. On one hand many of our brethren are suffering. May Hashem send them all a speedy recovery. May Hashem protect and shield everyone from sickness and may He console all those who have lost loved ones.


It is also a time of revelation of Hashem’s kingship. It is He who runs the world. It’s our opportunity and our obligation to fully utilize this time to the maximum, growing and shteiging in our closeness to Hashem:


As in the days of your exodus from the land of Egypt, I will show him wonders.

The creation of something from nothing, Divine providence, His rulership over all, the truth of His prophet.

This disease illuminates three of these points:

It came about suddenly and no one understands it - יש מאין


Every germ has an address - השגחה פרטי

The world leaders who claim we will beat this together without believing that Hashem is the Boss are expressing heresy - אפיקורסת .  No Jew should be swept up by such ill thoughts.

The uniqueness of the plagues in Mitzrayim was that they were a visual expression of Hashem’s powers and they were an opportunity for Klal Yisroel to fully comprehend and internalize these four concepts. Rav Chazkel Levenstein zt'l, the famed mashgiach of Mir and Ponovez, taught that seeing and feeling - אמונה חושי belief in Hashem has a much bigger impact than thought alone. This situation can be a total life changer for those who take the initiative to study and to internalize and connect to Hashem.


Let us search and examine our ways, And turn back to the LORD (Eichah 3:40)

With this said, we follow the directive of our gadolim to engage in the hishtodilus of following the health guidelines put forth by the medical professionals.

Let us all hope and pray that  כִּימֵ֥י צֵֽאתְךָ֖ מֵאֶ֣רֶץ מִצְרָ֑יִם אַרְאֶ֖נּוּ נִפְלָאֽוֹת As in the days of your exodus from the land of Egypt, I will show him wonders.


I wipe away your sins like a cloud, Your transgressions like mist— Come back to Me, for I redeem you. (Yeshayahu 44:22)


But confirm the word of My servant and fulfill the prediction of My messengers. It is I who say of Jerusalem, “It shall be inhabited,” And of the towns of Judah, “They shall be rebuilt; And I will restore their ruined places.” (Yeshayahu 44:26)

Next Minyan: Nissan 2 - Canceled due to public health situation

Canceled due to public health situation

The Joy of Tu b'Shvat by R' Tzvi Abraham


The Joy of Tu b'Shvat by R' Tzvi Abraham


Fruit was Adam’s first food because it was the only food commensurate with his spiritual stature.  Fruits bear a certain similarity to man, for though they grow from the ground,  they are raised above the ground, much like man, who has a body formed from the dust of the earth, but a soul that lifts him above it.  And although fruits grow from the ground, they hang down from  their branches:  we look up to the heavens to pick them, sometimes we even have to ascend a ladder to get them down. Eating fruits allowed Adam to nourish his body without turning his focus to the earth. Consider this, in contrast to the serpent, who was punished with the curse of eating the dust:


14 And the LORD God said unto the serpent: 'Because thou hast done this, cursed art thou from among all cattle, and from among all beasts of the field; upon thy belly shalt thou go, and dust shalt thou eat all the days of thy life.


All the material pleasures of this world are symbolized in fruits.  The prohibition we recite in the Shma of following after the temptations of the eye reminds us of the visual appeal of the fruit that kicked off the history of sin.


If it was just good eating, Chava would have restrained herself, but the fruit awakened a lust in her eye, which induced her to prefer the wisdom that would satisfy that lust (the wisdom of the world)  to the Wisdom of G-d.


It was fitting that Adam lived entirely on fruits, the  world’s greatest delight, for he drew his pleasure into his unwavering devotion to G-d and, in doing that, united Heaven and earth, which was his task in the Garden of G-d.  Eating grains or vegetables, he couldn’t do that. The pleasure of eating them can’t compare to the pleasure of eating fruit, because the taste of a fruit contains all the pleasures of the world. To eat anything but fruits would have been  a betrayal of his spiritual stature and  a repudiation of the task for which he had been created and placed in the Garden.


Bu when he ate a fruit which G-d had forbidden, he betrayed that task and repudiated it, because  forbidden fruit has no part in the delight of devotion to G-d.  Just as he had lifted the earth to Heaven before,  eating the forbidden fruit of the Tree of Knowledge, he divided Heaven and earth, casting it from the threshold of Heaven, where he had sanctified it by his devotion to G-d, into the abyss of the serpent’s kingdom. Cain, his son would soon commit murder, and within a few generations, his children would be worshiping idols. He would be cast out of the Garden and condemned to till the soil.  So began the tragic history of man as we know him, struggling or succumbing to the evil which rules his heart by his preference of the wisdom of the world to the Wisdom of G-d.


The situation was corrected—momentarily—at Mt. Sinai, where, the midrash tells us, the Children of Israel ascended to the spiritual level of Adam before his sin.  That correction was quickly  undone by the sin of the golden calf, but not completely. For Adam was cast from the Garden into the desolation of tohu, and in our time, the desolation of tohu is relieved by the Light of Torah and the power to unite Heaven and earth restored by the gift of G-d’s Commandments.  Ma’aser is one of those commandments.  When we take ma’aser from fruits, we do teshuvah for Adam’s sin.  The fruit that Adam took for himself, in violation of G-d’s Command, we now give to G-d in obedience to His Command. The celebration of our ability to do that is the joy of Tu b’Shvat.


Tu b’Shvat does teshuvah for Adam’s sin, the most comprehensive, fundamental and pernicious of all sins, for it put us in the thrall of our wandering eyes. The dignity and joy of the day is the opportunity to renounce that servitude and rededicate ourselves, as the act of taking ma’aser symbolizes, to lifting the earth to Heaven and living our lives with G-d.  May G-d note our efforts and reward them soon with the coming of the Moshiach and the revelation of His Kingdom!


What then, is the best way to celebrate Tu b’Shvat?  With the fruits of Eretz Yisrael, because they have been ma’asered.  Even better, with fruits from which we take ma’aser on Tu b’Shvat, for the ma’aser we take on the New Year of the trees is a sign  of our determination to spend the entire year, from Tu b’Shvat to Tu b’Shvat  correcting the sin of Adam by shielding our eyes from the  temptation of forbidden fruits that turn the heart away from G-d and betray our task of restoring the world to the Kingdom of Heaven.
at February 11, 2020 No comments:

Adas Yeshurun of Beit Shemesh holds a monthly Friday night minyan according to the nusach and minhagim of traditional, historic Ashkenaz, ie Minhag Ashkenaz aka Yekke davening. We meet in an apartment in the Dolev area on the first Friday night after each Rosh Chodesh. We have a seating section for ladies. You don't need a background in Minhag Ashkenaz or immediate ancestry within German Jewry to join us. All you need is either a love for the moving traditions of Ashkenaz or curiosity about them. Please write to AdasBeitShemesh@outlook.com or phone 058-324-0374 for more information.